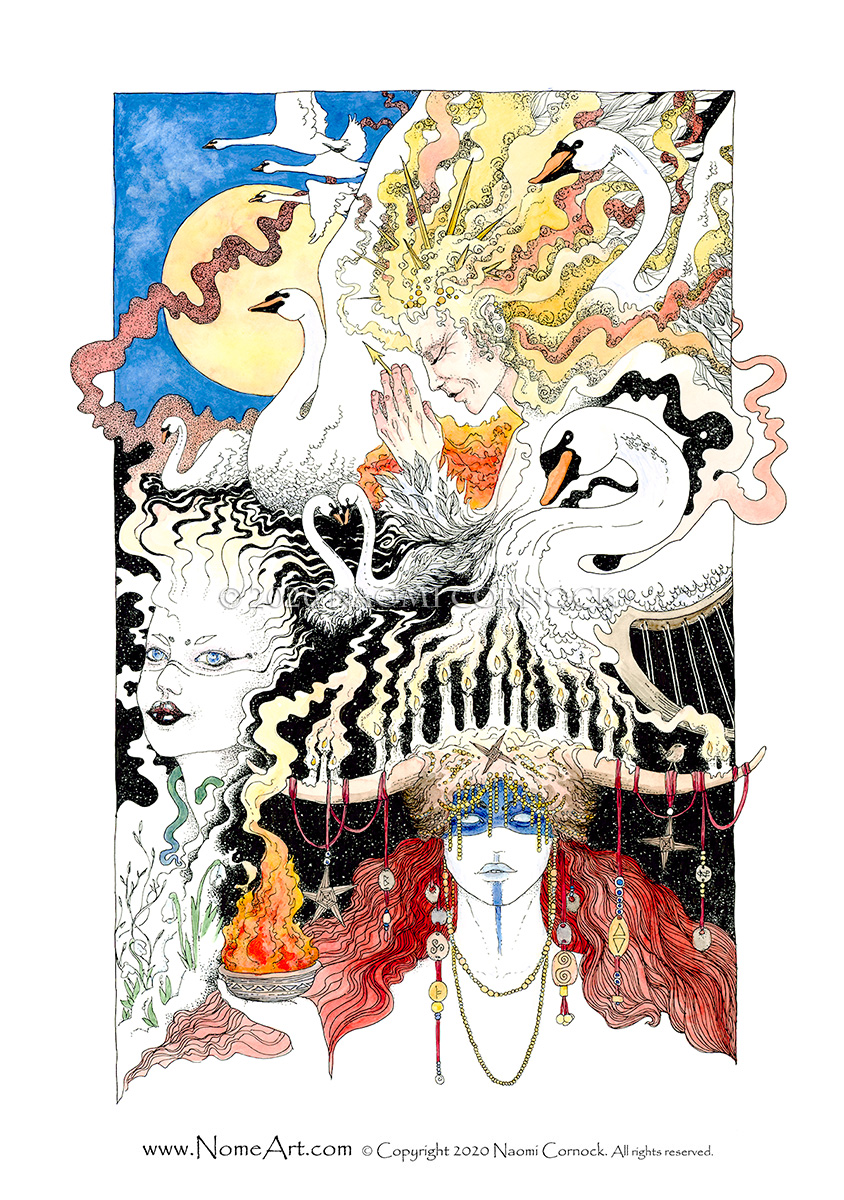 I embarked on this image because I felt a need for balance. I had painted the Morrigan in 2019 and I always felt the dark queen needed her sister goddess of the sun and keeper of the light half of the year to be complete and come full circle. So after a harrowing 2020 I needed to celebrate, to truly rejoice the return of the light and called Brigid to rise from the dark and brighten our days at this time … for beginnings full of hope and potential new growth.

Brigid is an ancient goddess revered in pre christian times throughout Ireland, Scotland and across the Celtic tribes of northern Europe. In Ireland she features prominently in the sagas of the Tuatha De Danann and was later manifested in a form acceptable to the christian religion as Saint Brigid of Kildare, where she is still worshipped to this day. In Scotland she is the maiden to the Cailleach crone, often referred to as the Bride of spring. To me she is the powerful triple goddess of light. She is the exalted one, keeper of the sacred flame, guardian of springs, and maker of beautiful things. She is transformation, inspiration and creativity. A sun goddess connected deeply with the fire festival of Imbolc.
Brigid is associated with the sacred cow and is often depicted as a milkmaid and it is a practice by many still to leave out fresh milk for the fae on the night of Imbolc in order to receive Brigid’s blessings for the seeds of the year’s crops, and thus ensure a good harvest from the next growing season.
Brigid is also associated with wild swans, and like her they are deeply connected with the returning of the light half of the year. As the days lengthen and the snowdrops begin to poke out of the cold ground, the great migratory flocks travel from the south to their breeding grounds in the lands of fire and ice to the north. With their appearance in our skies also comes the hope of new life, and like Brigid, they are heralds of spring and lighten the hearts of men who have endured the long dark, cold winter. She fills me with hope for our future and the future of our world, so much needed now in particular, as we begin our journey through the next turning of the great wheel. Wishing everyone in the northern hemisphere Blessed Imbolc.
Painted early spring 2021.