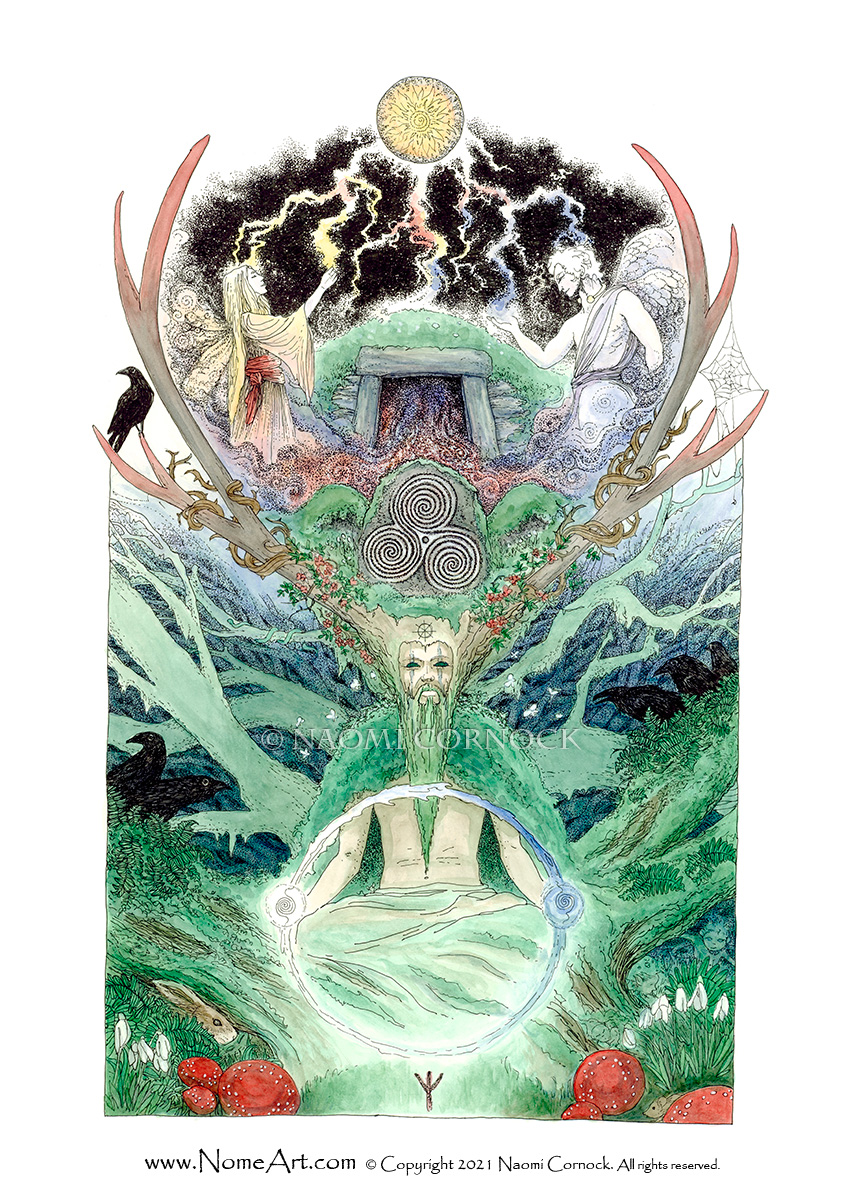 Near the beginning of the year 2020 it began to dawn on the world that a great new plague had arrived. In some countries the impact was small, in others the scars would run deep and fear would rule the lives of many. In this year of illness, death and isolation I was asked if I would do a commission piece for a man living in America, it was a piece to reflect and express his calling as a psychopomp, a piece he had been asked by his guides to have done and it was the perfect piece for the time as there were many souls leaving to cross the veil.
However strangely other projects seemed to call first and it wasn’t till the end of 2020 at Winter Solstice when this piece finally demanded to be manifested, which I found hard to understand at the time, but was soon to realise how important the timing would be.
And so it was that when I began to meditate on this piece, we in Britain entered the worst part of the second wave of this Pandemic and so many more died than we ever imagined could in our country. By the time I finished the piece the death toll was over 100,000 here and countless more around the globe. If there was ever a time for lost souls to be lead beyond our realm to the after life it was now. In my meditations I could see in my minds eye lights streaming from the planet out into the ether of space, so many again and again. Not just human but so many other life forms, the extinction event we have all been hearing about playing out in real time.
During this time we discussed back and forth our different visions of the piece and elements to be used in order to express its magick and purpose, but it wasn’t until the first dark moon of 2021 when everything fell into place.
On this dark moon in the darkest of hours of lockdown, in the deepest part of winter I wandered into a new forest I had not explored before where I met an old oak tree, and further up the hill behind the Oak I discovered a cairn among a ghostly copse of silver Birch. I sat there and cried for all those who had lost the battle to breathe and left this realm. After I acknowledged the sorrow which had covered this dark moon I sat with the lovely oak and he enfolded me with his deep peace and whispered to me ‘all things pass and will return again’ so says the wise old one of the woods and I felt the shift. The sorrow remained, but tempered with acceptance. This piece is in response to all these experiences and a reminder to always ‘Honour the Ancestors’

In the image the horned shaman, who is also Cernunnos the ancient god of nature, holds space in honour of our lost loved ones. He sits in the cradling branches of the Oak, a cloak of moss on his shoulders his crossed legs absorbed into the trunk of the oak, connected to all things living, just as in the cradle of his antlers he holds space for the dead. Between the great god’s antlers on the left side the Fae Queen helps souls streaming from the mouth of a barrow to the source above, just as the angel Baraqiel does on the right, together they bring balance of the divine feminine and masculine. They shepherd the souls as Cernunnos below holds space with dignity and strength. The six ravens guard the oak and the rune Algiz also protects the sacred space. The triskele at the centre of the image pulls everything together, Cernunnos, the fae queen and the angel… life, death rebirth. The cycle is never broken and our ancestors, us and our descendants always and forever connected.

Psychopomp: A guide of souls to the place of the dead.