Throughout history snakes have had many legends surrounding them, linking them to creation, fertility, sexuality and transformation.

Snakes in Celtic cultures are the embodiment of graceful travel over any terrain, transformative healing, and a deep connection to the underworld as well as across the veil. In some Celtic cultures the Druids were called Adders. When Ireland was converted to Christianity and the Druidic traditions were destroyed St. Patrick bragged that he had driven all of the snakes out of Ireland.

In other indigenous cultures snakes are creation creatures as with the rainbow serpent in Australian Aboriginal mythology, in some North American indigenous peoples snake is a creature of destruction swallowing the world whole. In other Norse traditions the snake is represented swallowing its tail forming and endless circle of life, death and rebirth.

For me snake teaches us that in order to transform and renew ourselves we must shed the old, be rid of that which is holding us back.

To snake I ask, guide me to know what is holding me back and needs shedding away 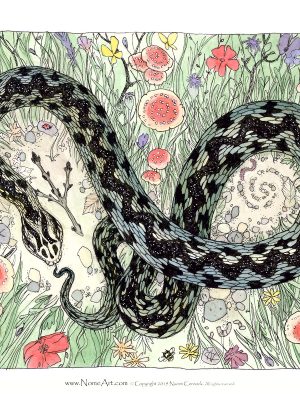