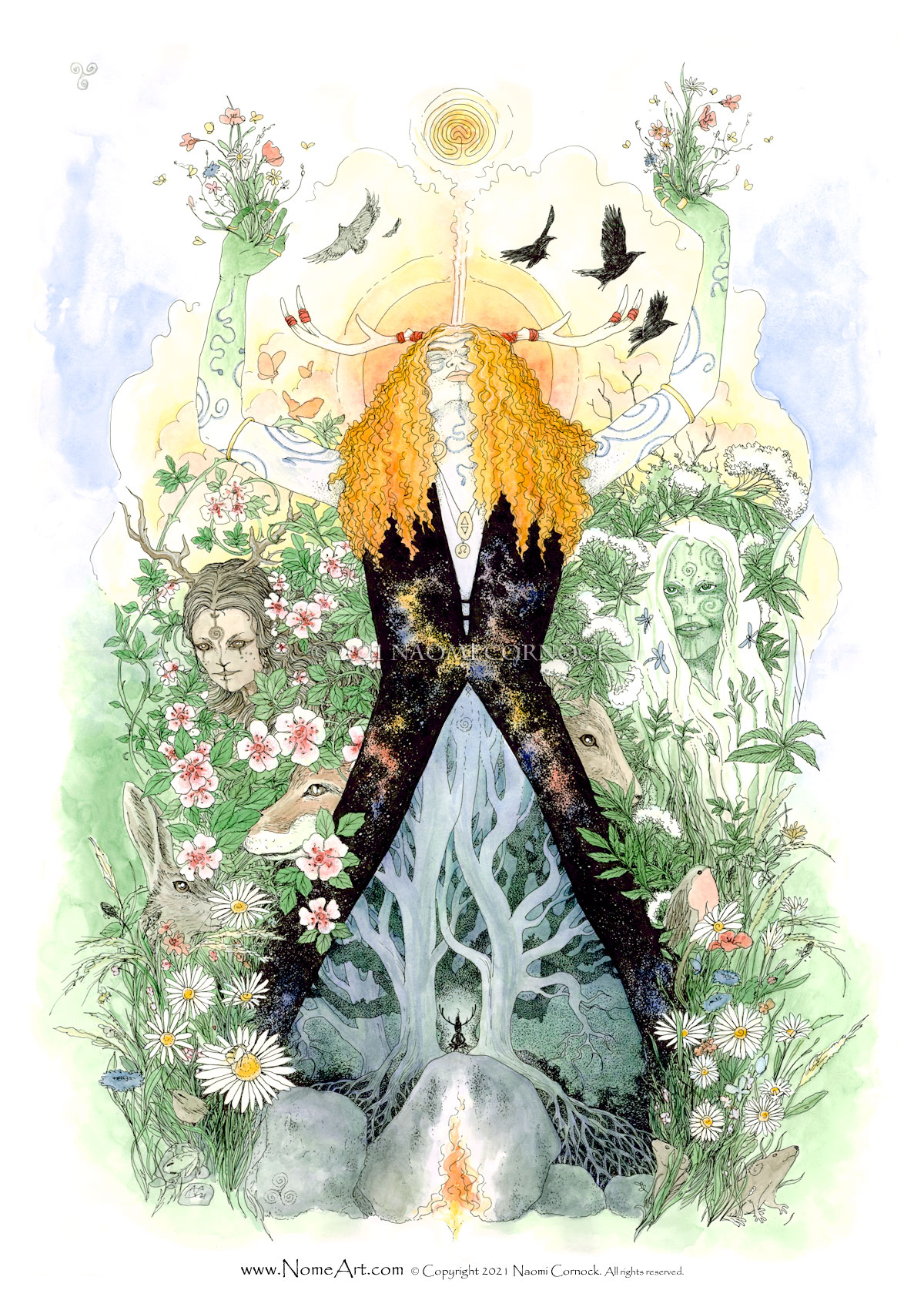 Now on the Wytches Wheel we move from Beltane to Litha and this Summer Solstice of 2021 I went to West Kennet Barrow on Salisbury plain to connect deeply with land and the ancestors to birth this painting of the Litha Priestess. The image was a request from a priestess who wished for an image embracing her new deeper role as initiatrix and mentor for others called to follow this path. She embraces the goddess in her different forms, as priestess to Brigid keeper of the sacred flame, Elen the goddess of the wild places, and the goddess Cerridwen keeper of the cauldron. As all these goddesses resonate deeply with me and I had been seeking inspiration to channel the coming energies of Summer Solstice, this piece was fated to be. A priestess embodying the goddess at the hight of her power on Solstice eve.

In my vision at West Kennet Barrow I saw the sacred landscape of the plain laid out before me. Shining points sparking up from the earth, Stone Henge, Avebury, the sanctuary and Silbury Hill, the dragon lines snaking across the landscape in all directions. In my vision the high priestess stood in front of the barrow arms raised to the skies, herbs and summer meadow flowers growing from her palms, sacred fire burning above her head as life giving sun. On her left was the maiden as huntress and on her right the crone, grandmother Elder, all three aspects of the goddess separate and one at the same time . I painted the cosmos in her gown and the sacred horned god of the the wild lands sitting within her body under the leaves of Oak surrounded by Beech trees. At this point West Kennet and Avebury are folded on top of each other, one within the other. The oak is growing from the mound of the barrow and the Avebury Beeches growing around, creating the sacred grove. The dragon lines flare with energy, invoked and charged as many folk gathered together on different connecting points raising their voices and music to the skies, feeding the land and spirits. At the peak of my connection to the ancestors, the land and the gods I rose above the barrow floating in the mists and I could see a dragon line clearly all the way to Glastonbury Tor as it shone bright in the twilight, and then further west to my homelands until it wound to magick Kernow where the dragons arose carrying the threads of energy up to a shining, silvery web of wyrd. I returned to the earth with the many voices of the tribes ringing in my ears and so much love in my heart and with the blessings of the great goddess .

I would like to thank Priestess Laura Swann for her request for this image and for being my muse for summer solstice. I would also like to thank song writer, priestess and inspirational creative wise woman Susan Paramor for her words, her wisdom, and for her song which allowed me to find my way home. Also to Becky Mackeonis for her magick and her elder grandmother tree, Elder spirit also grounded me on my journey. This is my story of Litha and painted in honour of the women and men who dedicate their lives to nature the sacredness of life, land and spirit above all else, this piece is for you. Blessed Be

Links to the work and magick of Laura Swann: https://www.holisticbirthkeeper.com/ Instagram @laura_hart_swann