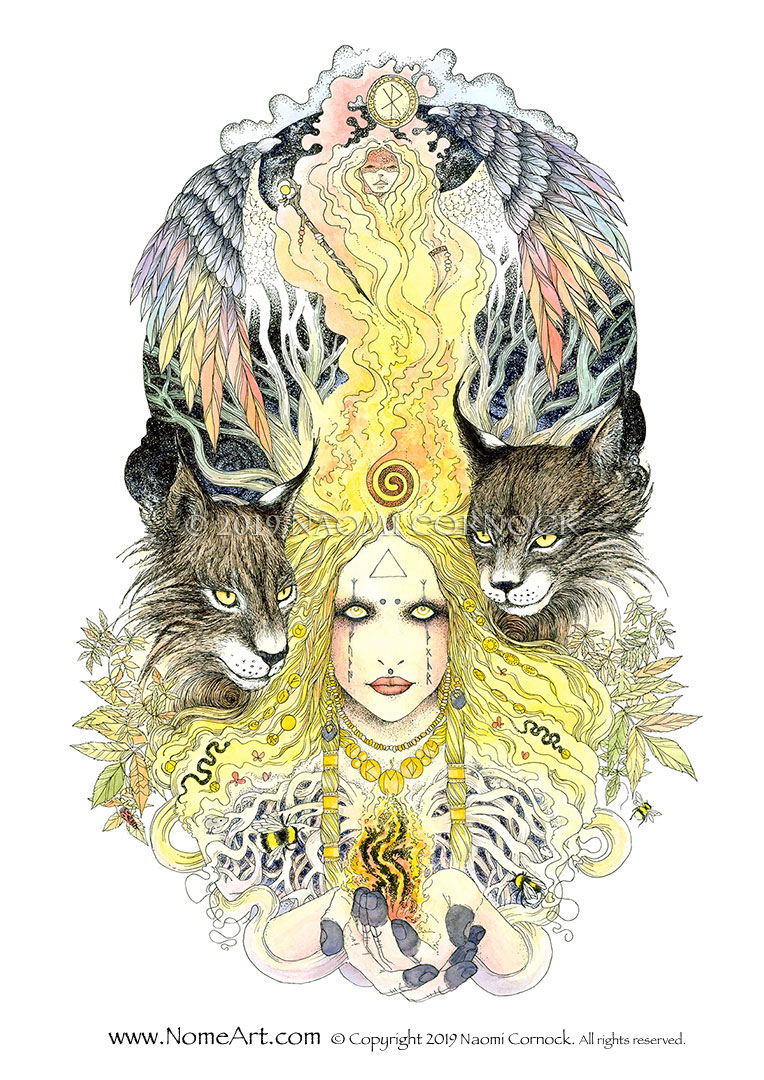 I call Freya to embody heart and fire magick. The goddess of passion, beauty and bounty, patron of the seers, scorched with inner sight.

In Norse mythology, Freya, ‘the Lady’, is a goddess associated with many things including, death, love, sex, beauty, fertility, gold, and Seidr. Freya is the owner of the necklace Brisingamen, which she purchased from the Dwarves at great cost and protects it from thieves with a fiery intensity. She rides a chariot pulled by two cats and is accompanied by the boar Hildisivan, and possesses a cloak of falcon feathers which gave her the gift of flight. A member of the Vanir tribe of deities, Freya shared her people’s natural inclinations towards the magical arts of divination. It was Freya who introduced the gods to seidr, a form of magic that allowed practitioners to know and change the future. Women are mostly associated with this tradition and in old Norse cultures the Seidr shamans were called volva. They travelled from place to place performing requested acts of Seidr in exchange for lodgings, food etc. They were both revered and reviled, blessed and feared.

One of the most mythical Volva was told of in the Poetic Edda poem Voluspa. The first volva, maybe even Freya herself in disguise, was called Gullveig and she was spurned for her predictions, pierced by spears before being burnt three times, and yet was three times reborn, and after the third time she was acknowledged for her magick and went on to perform great feats of Seidr.

“The war I remember, the first in the world,

When the gods with spears had smitten Gollveig,

And in the hall of Hor had burned her,

Oft and again, yet ever she lives.

Heith they named her who sought their home

The wide-seeing witch, in magic wise;

Minds she bewitched that were moved by her magic,

To evil women a joy she was”

I chose Freya for Healing Fire as she for me is the welcoming warmth of hearth fire, as well as the transformational power of wild fire. The healing  magick of fire is difficult to balance and will always challenge us with its ferocity to bring great change too swiftly!
Freya is my fire healer, she is keeper of the flame and embodies the fiery passion that transmutes. Freya blesses us with the energies of heart fire and passion fire, and like the Phoenix and Gullveig, we are reborn and transformed into our magical skin, ready to fly. 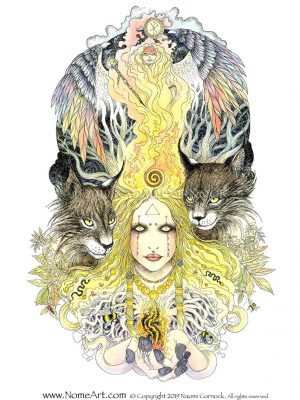