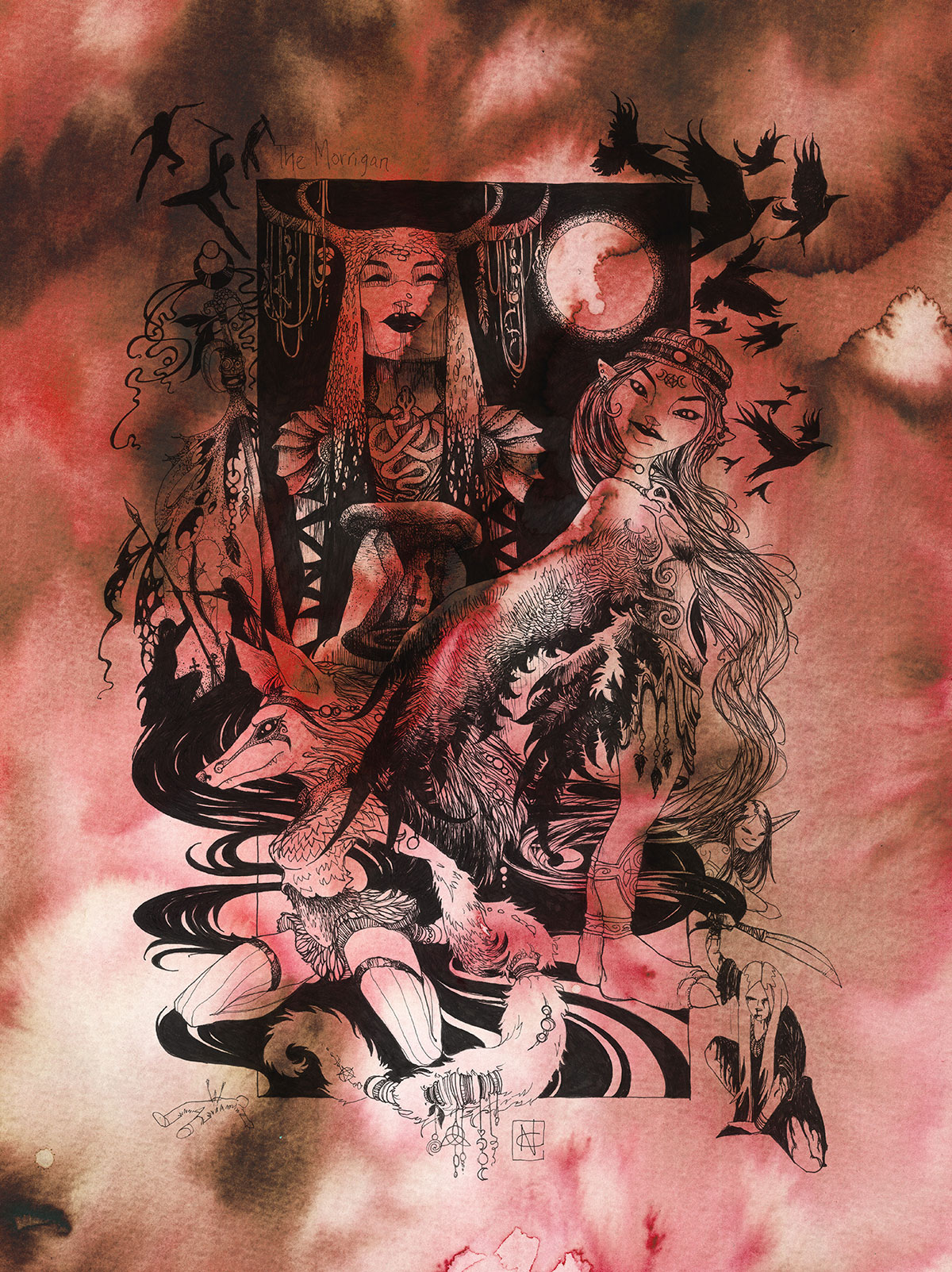 The Morrigan ‘The Great Queen’

The Morrigan (also known as the Morrigu) was the shape-shifting Irish Celtic Goddess of War, Fate and Death in addition to being the patroness of revenge, night, magic, prophecy, priestesses and witches.

The Morrigan was one of the magical race of beings called the Tuatha De Danaan (“People of the Goddess Danu”). Who were said to have been one of the early inhabitants of Ireland of which a rich tapestry of myth and legend arose. As the time of magic was replaced by the time of man they diminished in size retreating to live under the hills. They are now often described as the Fae, Faeries or ‘little folk’.

The Morrigan is a fierce, strong warrior goddess and patron of slain warriors in war. Often referred to as the “Great Queen” or “Phantom Queen” she appears as a portent of death through many guises. On the eve of a battle she can be seen at the edge of a river, as the “washer at the ford”, scrubbing the blood from the clothes of warriors who were doomed to fall. She would also appear as a raven over a battlefield foretelling and influencing the outcome. Her role in Celtic legend is similar to that of the Valkyries in Norse folklore in that both made decisions regarding who would live and who would die in battle.

The origins of the Morrigan appear to be directly linked to the megalithic Cult of the Mothers, who usually appeared as triple goddesses. She is depicted as a triune goddess (that is a deity who is three individuals in one). As The Morrigan she represents war or battle, she is fierce and will fight to protect the weak who cannot protect themselves, very much as an avenging mother aspect. The Goddess Nemain (meaning “Frenzy” or “Fury”) is the maiden in all her youthful strength and impetuous intensity. In her final aspect, the Goddess Badb (meaning “Vulture” or “Venomous”) we see the crone aspect of death and transformation.

The Morrigan is a goddess to honour and call upon when in need of battle ready strength. For times when you need to stand strong for the struggle to reach a challenging goal you have set yourself.

With vitality and strength,
May you win all your battles.
Always honour your losses,
As you rejoice in your victories.