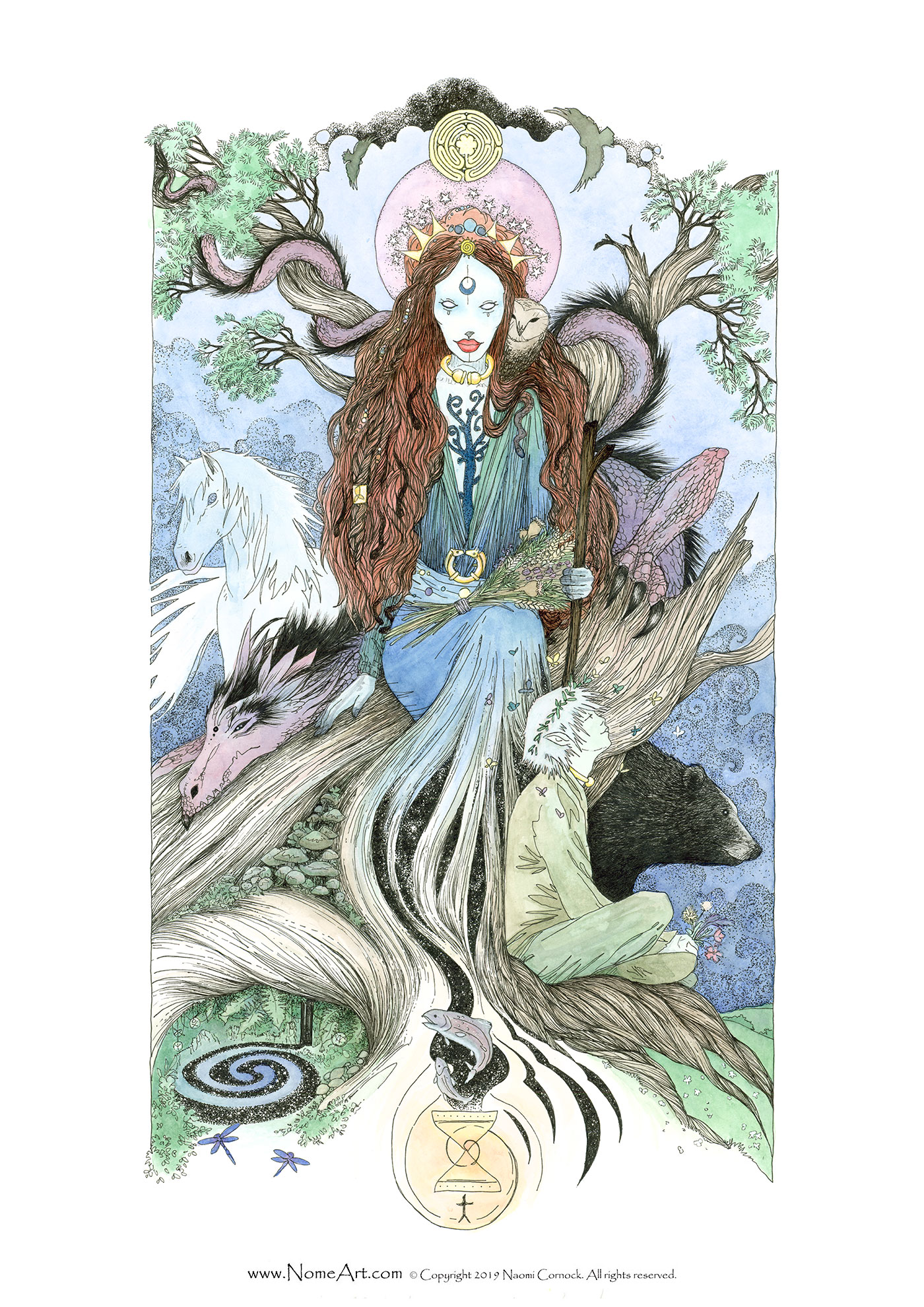 The Empress – The Sovereign Goddess

The concept of the Sovereign Goddess in Pagan cultures across the British Isles and the European mainland often depict her as empress, ruler, leader, mother. To the Celts sovereignty was not simply the right to rule over a clan or country, it was a divine power that was granted by the goddess of the land to the leader of the people. The goddess and the land were one and the same, and thus sovereignty took on the guise of a mystical or divine woman. She is embodied in the great queens such as The Morrigan, Arianrhod, Epona and Rhiannon. Later she appears in myth and  legend as the Lady of the Lake in the Arthurian tales and Macha of Ulster who is also recognised as one aspect of the Morrigan. She bestows the gift of Sovereignty on the true  ruler of the realm (often male but not always), who acts as her representative. By joining with the goddess, the ruler in turn becomes connected to the land and its people, and she will bless their reign with abundance of fertility and prosperity.

Originally this was a request from a gentleman who has given his heart and soul to the Empress and wished me to manifest her for him. I also found her through this process and this sacred art piece is a culmination of me, him and her.

I have chosen to have the goddess seated on a tree throne with animals of power, guardianship, knowledge and magick surrounding her. The tree is one of the Bristlecone Pines of the White Mountains in California, and one of the oldest living beings on our planet, a tree of the ancients. I chose this tree for its endurance, longevity and resilience. To live so long through such challenging conditions for me is the most fitting seat for the Sovereign Goddess, Empress of the Universe, and to emphasise this universal aspect of the goddess she wears a crown of stars and galaxies in her clothes, which also become part of the tree.

The black bear to one side of her, protects the physical realm, a guardian of nature. The white horse is protector of the spirit realm, and connects the people to the ancestors. They stand either side of the goddess as dualities of light and dark with her in the middle connecting them making a whole. The dragon as a creature of fire and magick is the bridge from the other realms connecting the goddess and her anointed ruler at her feet to the sky, land, water and the shining ones, as it twists around the tree of ancients. The salmon is jumping from the waters in the holy grail/cauldron, the font of knowledge, and represents the wisdom of people and the ancestors.

The font of knowledge is also fed from springs, sacred places of the goddess and spirits of the land. So I have the sacred spring coming from the tree of ancients at the feet of the goddess swirling into a double spiral of the spiritual journey of shaman, priest, priestess, witch, and spiritual healer.

The Sovereign Goddess teaches us to hold our power up to the wind, to let it flow from us into the waters of the world, to use it to ground and endure as earth and to rediscover our inner fire… she is the mother, protector, nurturer and leader…the Empress of everything, the Sovereign Goddess of the land and a reflection of ourselves. She teaches us to love ourselves and to wear our power like a mantel of stars.