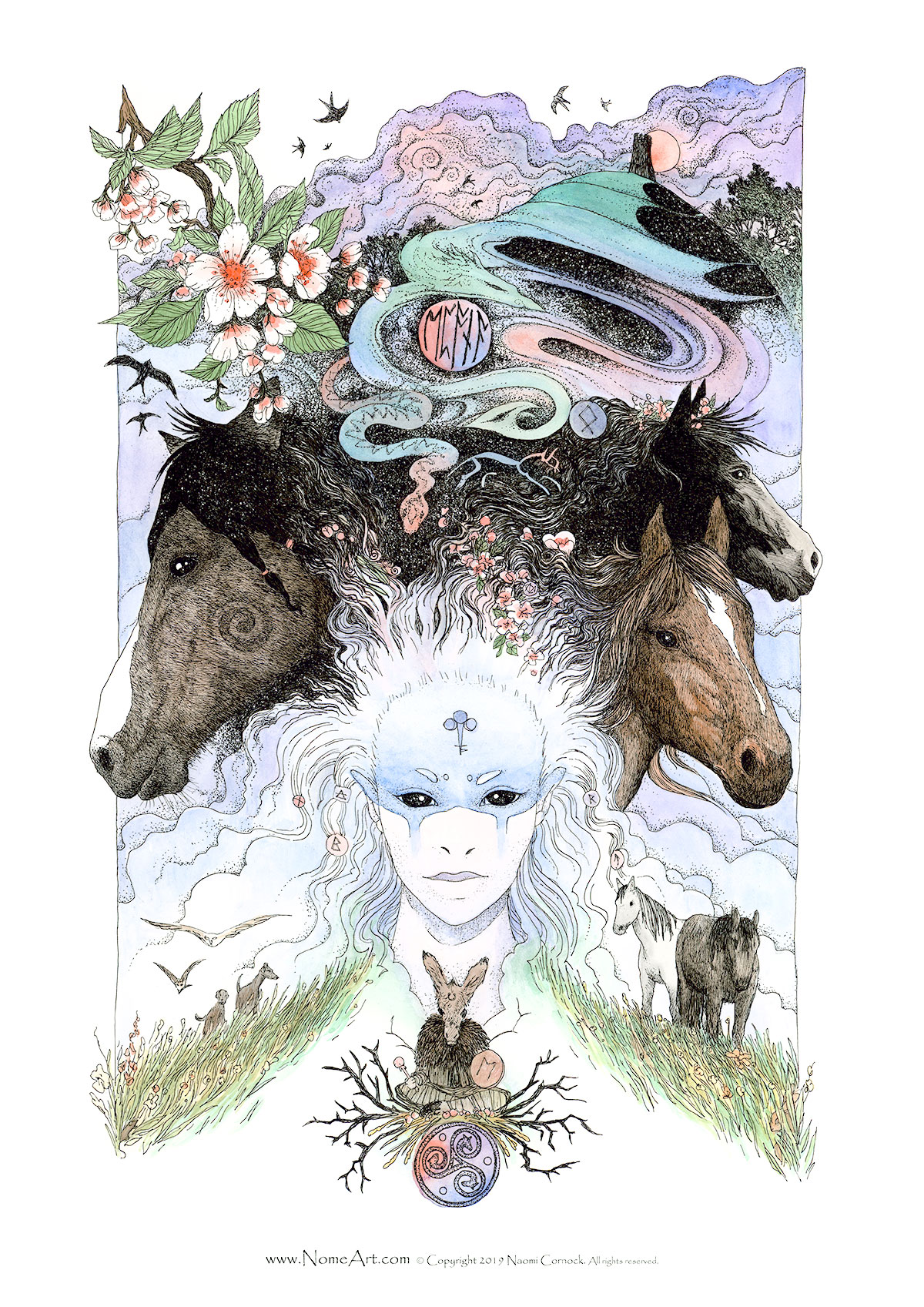 Epona – Divine Mare, The Great Mare, protector of horses and honoured by the riders of Albion

Epona is not only protector of horses, ponies and donkeys and those who work with them, but also for those on long  journeys, both physical and spiritual, as she is also a guardian for the shaman as they travel with the spirits.  She is also goddess of fertility, sovereinty and the after life.

Although her worship originated with nomadic Celts in Gaul during the Iron Age it extended throughout Continental Europe. Epona was the only Celtic deity venerated in Rome itself and her importance to the Roman cavalry was signified with a shrine in nearly every stable across the Roman Empire. Even the Roman Emperors venerated her, believing her a sovereign goddess bestowing upon them a connection to the land and it’s fertility and there by the right to rule, the same as the chieftains of Gaul and Albion had before them. She is goddess of the tribes.

There are many depictions of Epona across Europe, usually representing her as a woman riding side-saddled on a white horse which was the symbol of purity and often associated with the spirit of the land or connected to the underworld. The goddess was believed to carry souls of those who died, on her horse from the realm of the living to the dead. The goddess was occasionally accompanied by a dog or a foal, or portrayed feeding a foal. Sometimes she is simply portrayed as a white mare, as is seen with the “Uffinton White Horse” on White Horse hill in England, which is thought to be an Iron Age representation of Epona. Other  various incarnations of Epona include Rhiannon in Wales, Macha in Ireland, the cult of Rigatonia in Britain and the Celtic goddess Edain

My reconnection with Epona came after I worked with my ‘Empress’ piece and I was calling the Goddess as Sovereign in my meditations. Epona is a familiar presence for me, as I have honoured her for a long time and the longer I live on my ancestral land the closer I feel to her, and several other manifestations of the goddess and spirits of the land. She was the next to knock on my door so I started to actively search for the time and space to call to her and manifest her energy on paper.

It was at this time through a series of wonderful synchronicities I met an amazing woman who had a herd of horses she was rewilding on the Somerset lowlands, Glastonbury. The herd also helped in the healing of people through different equine therapy programs … and I had the honour to visit with them. I’m still finding it hard to express in words this experience with these animals, who are free to be horses with no direct human use, yet accept people into their space with such calm and grace. Their energy was so balanced and harmonious, it was magical to just be!…. and yes Epona walked with them!

After my visit with the Paintedhorse herd I climbed Glastonbury Tor  via the apple orchards, it was just after Beltane, the journey was filled with her energy, from the apple blossom, the rushing air elementals in the wind at the top, to the deep rhythm of the dragon’s heartbeat as it slumbered beneath my feet. Epona riding in the air, around the Tor, through me, the earth and sky sang to me! So at journeys end she also dances with me now,  in the cave of stars, to feed the earth so we can continue on.

The horses from the Paintedhorse herd featuring in the image are: Jackson, Blossom, Hope, Epona and Prada. The rest of the herd are: Danny, Gunner, Grace, Logan, Polly, Uhla and Rio. A big thank you to Livvy Adams and all the work the Paintedhorse herd, and their human facilitators, contribute to the rebalancing and healing of our land and the people who live here. https://paintedhorse.org.uk/