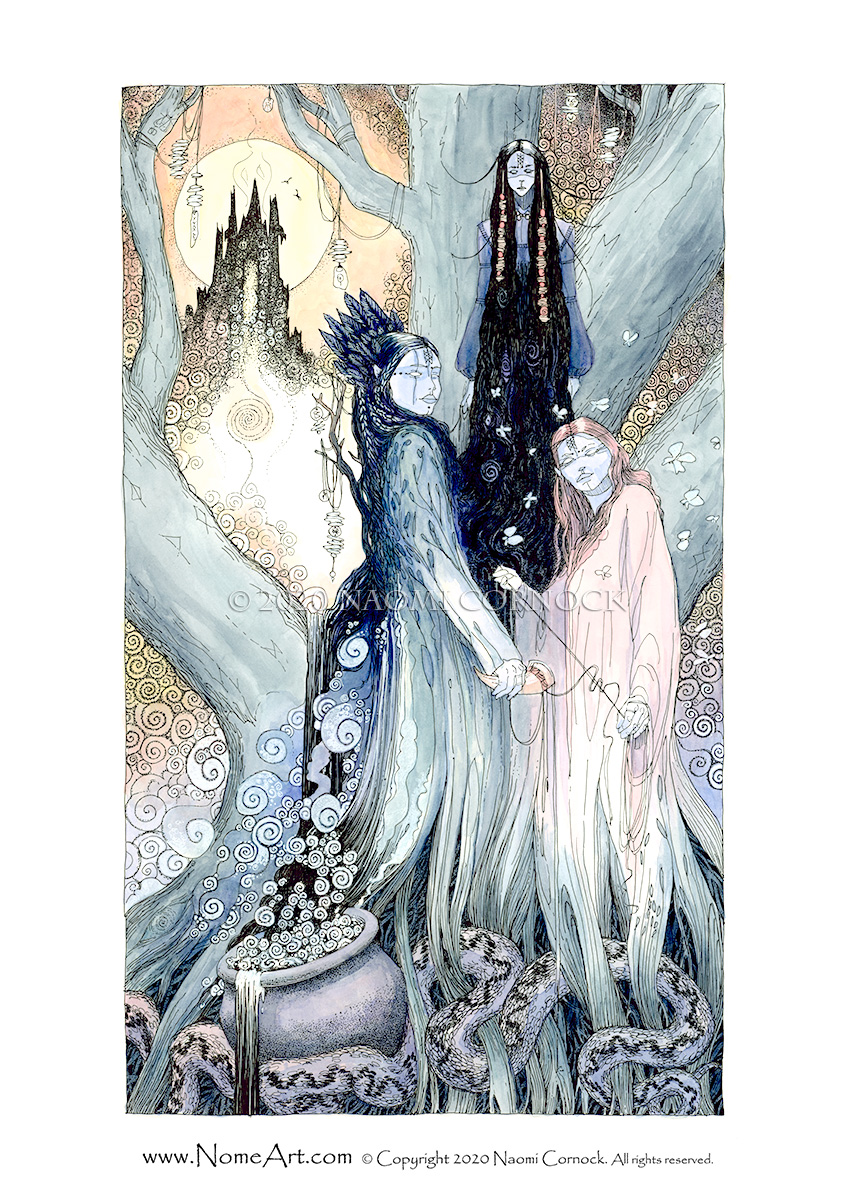 The Norsemen met there – Elfin folk,
And maidens that were richly clad.
And every word the maidens spoke
Touched their hearts, and they were glad.

“Tell to us what land we see?”
They asked a maiden, one of three.
She said “This is your destiny,
And You must stay eternally”…

The Longship by Sean Mychael Rice.

This image was inspired by two synchronous events around the time of Samhain 2020. I had just begun to read Sean’s poem ‘The Long ship’ and visualise the adventures of the Norseman on the high seas. At the same time I was having my final session for my Futhark journey with my Rune Master the indomitable Duncan White. I went on one last vision quest and communed with the norns.
We met at the base of the world tree, an Ash, then an Oak, then Yew then all three. They weave the web, guard the well and tend the tree as Nidhogg gnaws its roots, waiting for Ragnarok to fly free. In amongst the runes etched on trunk and branch they stand, three maidens of the mists, weavers of all our destinies.

More on the mysterious Norns
The three known as Wyrd (Urd), Verdandi and Skuld
Skuld the maiden (future/necessity) “that which shall be”. She doesn’t directly represent the future exactly, but more the consequences of the actions of the past and present, similar to the concept of Karma in the Asian philosophies. Verdandi the mother (present) “that which is coming”. Urd the crone (past) “that which became”. She is the principle caretaker of the well of fate, also called Urd.
Everyday till Ragnarok the Norns pour water from the well on Yggdrasil to keep its branches from rotting then weave the life threads of men and gods into a web of fate, they also write runes on the roots of Yggdrasil, effecting the fates of the gods and the nine worlds.
Be aware in Norse mythology these are the Wyrd sisters, “sisters of fate” and don’t directly correlate with the concept of chronological time, as do the Greek Fates.
I call upon them when I do my oracle readings, to help with focus and clarity, and they now help me in spirit journey to travel the great web of wyrd.