And in the cold nights’ deepest hour
They have made a wedding bower.
Whilst the world sleeps snug in bed,
Crystalline and Jack Frost wed.

But as the sun regains the skies
Summer comes and winter dies.
Then, Jack will take his winter bride
And to the northlands they will ride.

A Polar palace will be home
‘Till south, once more, again they’ll roam.
You’ll wake and see their cold design
Jack Frost and his Crystalline.

This piece I embarked on as a response to Sean’s poetry and was completed during a cold snap in January. One morning I popped out early in the morning and saw the most amazing frost designs on the car windows and instantly thought of Jack Frost and Crystaline. I used the designs left by the pair to create Crystaline’s and Jack’s wedding robes in this image. I had struggled with this picture for a long time and as it always is with the magical process of art, it came all at once, like a flurry of snow drops on a chill northern wind.

This image and many more will be published in a book of poetry by Sean Mychael Rice later this year. 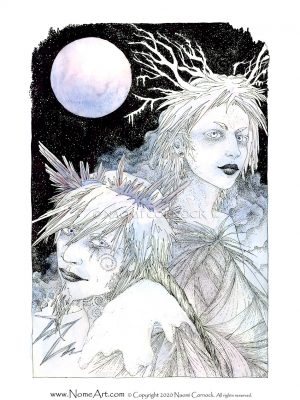 Jack Frost and Crystaline
A4 Print
A4 Giclee Printed on 100% Cotton Watercolour Paper
£15.00

Jack Frost and Crystaline
A3 Print
A3 Giclee Printed on 100% Cotton Watercolour Paper
£30.00